Matillion ETL has versioning features to help you manage versions of your ETL Transformation and Orchestration Jobs. Versioning supports many use cases, but perhaps the most common use is to capture and freeze your development at a point in time to designate as "live" or "production" versions, and to then continue working on your default version. This article discusses the basic versioning concepts and steps.

Matillion ETL's versioning system creates a copy of all of the jobs in your current project at that point in time.

If you have more than one version listed in the Manage Versions dialog, ensure that the version that you wish to base the new version on is selected before continuing. See Switching versions for details.

2. As you can see in the above example, we currently only have one version of our project, which is the Default Version. To create a new version, click the + button in the lower-left of the dialog. This will open the Create Version dialog. 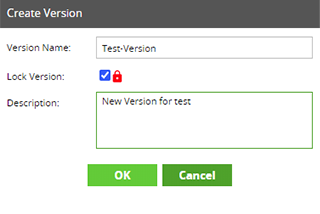 3. Give your new version a Version Name and, optionally, a Description. The Version Name can only include the following characters: alphanumerics, underscores, single spaces, parentheses, and hyphens. You cannot use a space as the final character in your Version Name.

Version locking allows you to protect a version of your project, This feature can prevent accidental changes to important versions such as a "production" or "live" version. The version can be unlocked if you later decide you need to make changes to the job.

When you have created a new version, you will see all versions of the project listed in the Manage Versions dialog.

To delete a version, click the icon next to the version you want to delete in the Manage Versions dialog. Click OK to confirm the deletion.

It is not possible to delete the Default Version.

Use the icon in the Manage Versions dialog to edit a version's properties. You can edit the version name and description, and lock or unlock the version.

Using and running a version

Once versions are set up there are a number of places in Matillion ETL where they can be referenced and used: