The script is executed in an external Bash process hosted by the Matillion ETL instance. Any errors encountered while running the script will immediately halt it.

To ensure that instance credentials access is managed correctly at all times, we always advise that customers limit scopes (permissions) where applicable.

Since Matillion ETL is based on the latest Linux, the command line tools are all installed. Furthermore, the credentials stored in your current environment are exported into the shell, so you may (and indeed should!) omit security keys from your scripts when calling the APIs.

All the usual variables are made available in the bash environment and any changes made to such variables will never be visible outside of the current script execution.

Matillion ETL runs as a Tomcat user and care must be taken to ensure this user has sufficient access to resources and does not uninstall any customer-installed Bash libraries.

If you cancel a task while a Bash script is running, then it is killed. If the timeout is exceeded, the script is also killed. The purpose of the timeout is to ensure scripts will never run forever even if they enter an infinite loop, or are blocked by an external resource.

Runs the Bash script, redirecting any output it produces into the task message.

1. ssh into the Matillion ETL instance.

2. Create a .sh file and paste the following script into the .sh file:

3. Save and close this .sh file and then run the following command:

4. The above command makes the .sh file executable. Once you have done that, run the following command:

6. In Matillion ETL, click Admin and then click Restart Server. Once the server restarts, the User property should be selectable on the Bash Script component.

You can, if required, configure the Bash Script component to be unavailable on your Matillion ETL instance. To do this, follow these steps:

1. SSH into the instance.

2. Open the file emerald.properties as a root user (sudo).

3. Locate MTLN_ALLOW_BASH_COMPONENTS and set the value to false.

4. Save and close the file and restart the server.

By default, MTLN_ALLOW_BASH_COMPONENTS is set to true.

In this example, we are staging a small amount of data to form part of a monthly report. We want to back up this data at the end of the run, so we use a Bash Script component to create a copy of the staged data in the S3 bucket. The job is shown below.

The Bash Script component properties are simple. The component is optionally given a name, then the script is written and a timeout duration is specified.

The script used is shown below. This simply archives the data staged on S3 into a separate "backups" directory. In this case, the name of the data directory is given by a variable that is set at the beginning of the job (variables may be declared by clicking Project and then clicking Manage Environment Variables.

As an embellishment, the rowcount of the data staging component is exported to another variable, set up in advance.

When run, the Job will end with a backup of the data being created. Due to the echo command, the name of the file and the rowcount will be printed in the Tasks console. 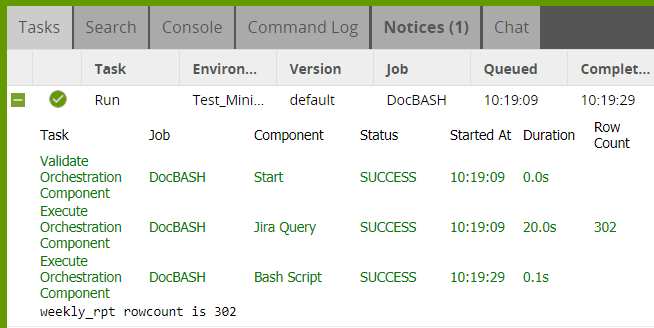