The term “data quality” is very broad, and typically has a dual meaning:

We’ll focus on the first of these two angles here, and act in the role of data consumers rather than primary creators. The foremost responsibility of a Matillion data processing system is to faithfully record all the input data, apply any required business rules, and deliver the output in an accessible and timely way.

As data consumers we have to first of all assume that the source data is perfect. It’s good enough to run the business operations, and is therefore fit for purpose. However, when designing a Matillion data processing system, you should always understand and question the source data and feed back on any suspicions or anomalies.

There are often technical problems with source data, in the form of outliers which can’t be handled in the desired way. The primary responsibility is first to detect the “bad” data, and then to reject it (so it doesn’t break the ELT logic), and finally audit the fact that some data had to be rejected.

This document will look at specific ways in which you can use Matillion ETL to detect, reject and audit data that’s of sufficiently bad quality that it’s unusable in an ELT process.

This document will look at specific ways in which you can use Matillion ETL for BigQuery to detect, reject and audit data that’s of sufficiently bad quality that it’s unusable in an ELT process.

Sometimes technical data quality issues like the above are caused by a genuine problem in the system of record. When you use a Matillion job to reject and audit bad input, you are providing feedback that can help solve the problem at source.

However some problems that manifest as data quality issues are actually because you’re reading the data wrongly. For example, if the system of record states that a flight from Sydney to Canberra took 33 minutes, and that a flight from Sydney to London took 22 minutes, you should take the opportunity to question whether “22” is a really measure in minutes? Perhaps there’s a business rule stating that values below 30 should always be interpreted as hours.

In a Matillion Transformation Job, detection of missing values is most commonly achieved using a Filter component.

The following job shows a flight Table Input component with several filters. Records which pass all the filters along the “happy path” at the top have both an Origin and a Departure airport, and are therefore usable for further processing.

In contrast, any records which fail either filter will end up going to the Unite operator for accumulation. The Calculator component adds a couple of attributes recording the time and reason for failure.

All records which pass the filters to end up in the “problem path” should be saved to an audit table using the Matillion Table Output component.

From there they can easily be sent back to source for data correction, or else reprocessed later once the missing business rules have been added.

This job also illustrates the important and commonly-used technique of adding complementary filters. The conditions in the pairs of filters highlighted below are exactly opposite to each other, and every record will either fall into one or the other category. 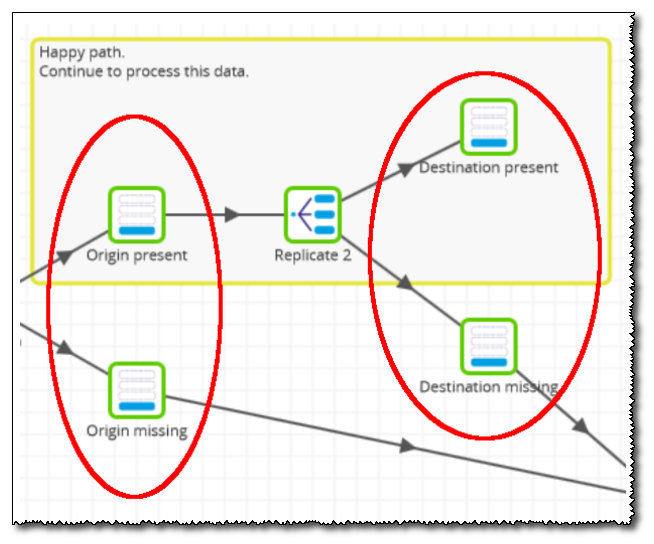 It’s important that these pairs of filters really are exactly opposite. There should be no cases where a record is successfully processed and gets audited to the rejection log.

It’s vital for relational data to have known unique or primary keys. Primary keys are used only by the optimizer and are not enforced.

In BigQuery there is no concept of a primary key but columns can be identified within a schema for this purpose.

Matillion ETL must take responsibility for detecting duplicate data and acting accordingly. This is most commonly done using an Analytic (or “Window”) function in a Calculator component, with a formula like this:

This allocates an integer sequence number to every record, and ensures that there can only be one number 1 per combination of unique columns.

Every group of key columns (even if there’s actually no duplication) is guaranteed to have exactly one record with ROW_NUMBER() 1. This can be used in the “happy path” filter exactly as described in the previous section.

In this example, it might potentially be more useful to order the data by timestamp descending. This makes it very easy to pick out the last seat allocation from among the group of duplicates. It’s usually the “last” (i.e. the latest) record which is most useful, e.g. for final seating on the aircraft.

The complementary filters would be implemented by checking for the value equal to 1 (not a duplicate) and anything greater than 1 (is a duplicate), like this:

“Dates” that are not Dates

You should rightly expect that certain datatype conversions should be performed automatically, because they are unambiguous. For example it usually causes no problems to implicitly convert the strings “1”, “2” and “3” into integers, and append them into a table already containing integers. The database should successfully do this on your behalf without any manual intervention needed in the pushdown SQL.

Dates, however, are a different matter, and can cause data quality problems. For example a CSV file might contain the string “2009-01-11” indicating a seat reservation date. If taken from an American system you should assume that it means November 1st. But on an Australian or British system you should read it as January 11th.

You might be lucky and have the database correctly guess which interpretation you need. But when converting strings like these into real date datatypes, it’s best to be explicit about the format mask, using Redshift’s TO_DATE function. This also gives you the opportunity to apply business rules (such as “tomorrow” meaning system date + 1 day), and to reject dates that really do contain nonsense values.

You might be lucky and have the database correctly guess which interpretation you need. But when converting strings like these into real date datatypes, it’s best to be explicit about the format mask, using Snowflake’s TO_DATE function. This also gives you the opportunity to apply business rules (such as “tomorrow” meaning system date + 1 day), and to reject dates that really do contain nonsense values.

You might be lucky and have the database correctly guess which interpretation you need. But when converting strings like these into real date datatypes, it’s best to be explicit about the format mask, using BigQuery’s PARSE_DATE function. This also gives you the opportunity to apply business rules (such as “tomorrow” meaning system date + 1 day), and to reject dates that really do contain nonsense values.

For example, in a Matillion calculator component, you could do as follows:

This expression uses a pattern match to check that the string could conceivably be a date, and if so converts it using the explicit format mask YYYY-MM-DD.

Any other values are rejected, and a NULL is substituted. In this way the data can be added to a real date column if necessary. The complementary filters for this column would be:

The above examples have shown how to apply simple business rules to incoming data, in order to interpret it correctly.

For example, in a dataset of flights, the origin airport, departure airport and distance in miles is recorded. However there are a few inconsistencies:

How to reliably measure distance (and hence average flight speed and other descriptive statistics), if the actual measurements are unreliable?

In consultation with the business, the following rules were agreed:

The key to this is to find the most commonly recorded distance between every pair of airports. To improve performance and make maintenance easier, it’s best to perform this kind of aggregation on its own, create an intermediate “working” table of results, and use it to apply the business rules.

The above transformation job creates the intermediate table in several steps:

Having obtained the vital “most common” distances, it’s quite straightforward to apply the business rule, in a Matillion job like this:

From the second join, three distance measurements are available:

To apply the business rules, simply use the first of these three values which has a non-null value.

This article has demonstrated how to detect, reject and audit data which fails certain defined data quality rules, such as missing values and duplicates.

The main pattern is detect data quality problems using SQL expressions, then multiplex the data through complementary filters to either be processed or else to be rejected and audited.

Using this technique, you can use Matillion’s pushdown SQL to detect data quality problems in any input data, and to apply arbitrarily complex business rules.