Designing a Job for a High Availability Cluster

Designing a job for HA

When a Matillion ETL Job runs on a high availability (HA) cluster and a node fails (because of problems with network failure, instances crashing, etc.) and the Job is invoked by the Matillion ETL job scheduler, then within a few seconds the failure will be detected by another node and the job re-submitted from the start. Jobs that are invoked any other way (through the UI, via API or SQS) are not restarted.

Using Matillion ETL on HA clusters is an Enterprise Mode feature, meaning it is only available to customers on Enterprise Mode instance sizes. For more information, read Instance Sizes Guide.

To migrate an instance to a cluster, consider using the Server Migration Tool or Contacting Support.

Making sure your job is suitable for execution in such an environment revolves around 2 concepts:

Either concept, or more commonly a mixture of both, will result in durable jobs that will complete even in the event of total failure of an instance.

The idea of a database transaction is that if an error occurs, data is rolled-back to before the transaction began. A transaction can span many operations, and on Redshift this includes DDL statements as well as DML operations. Only if all operations succeed will any other database users see the changes made during that transaction. Matillion implements transactions as separate Begin, Commit and Rollback components - if you do not use any such components in your job, then each individual statement behaves as if it were it’s own transaction. 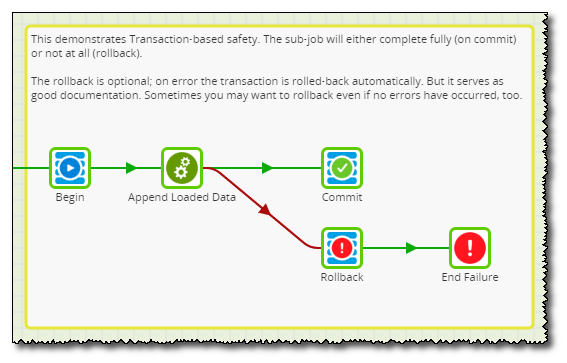 Rollback may occur on failure of the instance, a network outage or by running the Rollback component.

The concept of idempotence is that if a job fails and is re-run, it doesn’t matter where it failed since re-running the job will get things into a consistent state.

For example, if a staging table is truncated first, then a file loaded into it, then transformed and finally used to update a target table, then it doesn’t really matter how far it progressed up to the final table update because re-running the job from the start will have the same impact overall. So provided the final table update is done inside a transaction (table update actually executes multiple statements), the rest of the job does not have to. 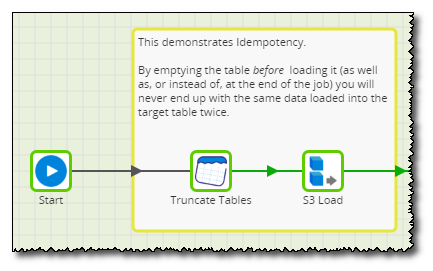 Knowing that a job can simply be re-run in the event of a failure is a good safety net, and even without High Availability failover (where the re-run it automatic) is still a good design goal to strive for. It makes supporting the job in production easier because devops engineers won’t need to know what the jobs do.