Grid variables can be used in many components (usually via the Use Grid Variable checkbox in component property dialogs) where lists of data need to be passed around. For example, a grid variable can be used to easily populate table metadata, or to pass arrays of data for use in Python scripts. In this article we give just a few examples of their utility.

The following Matillion ETL components can be used when working with grid variables.

2. In the Manage Grid Variables dialog you can perform the following actions: 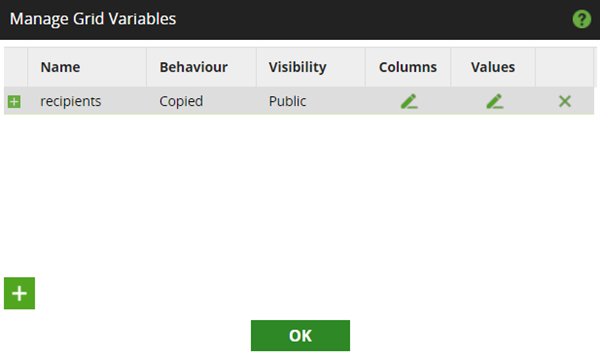 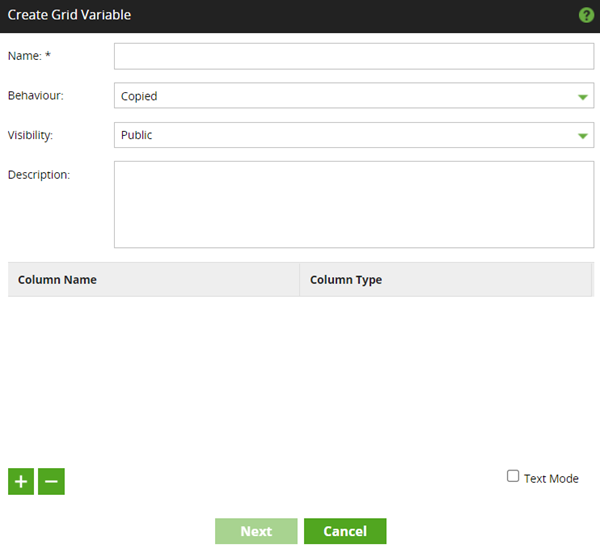 4. Below the grid variable properties is a list of columns contained by the grid. Each column has a Name and Type. To create a new column, click and enter the following details on the blank line created: 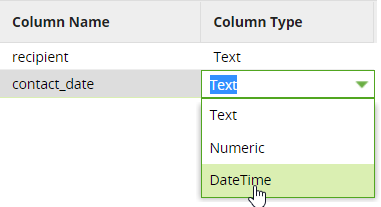 To edit an existing column name or type, simply click on the value you want to change. To delete a column, click the column name to select it and then click .

Click Next to continue to the second page of the wizard, where you can enter default values for the columns.

5. On the second page of the Create Grid Variable wizard, you can enter a default value for each column you have defined in the grid variable. This is not always required, as the grid variable can be populated in a variety of ways that do not require default values to be defined first (for example, using the Table Metadata to Grid component.

When you have finished entering default values, click OK.

Using to include columns from data sources.

Grid variables can be used to populate choices in multiple properties within Data Staging components. The Data Selection property, for example, which is used to select which columns are returned from a query: 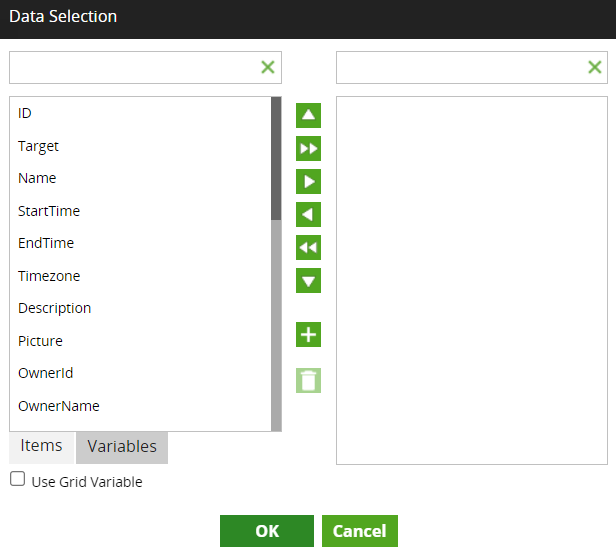 If you select Use Grid Variable in this dialog, you can use a pre-defined grid variable to select the columns. You would do this as follows:

1. Create a new grid variable, as described above, which contains a single column named "Columns". 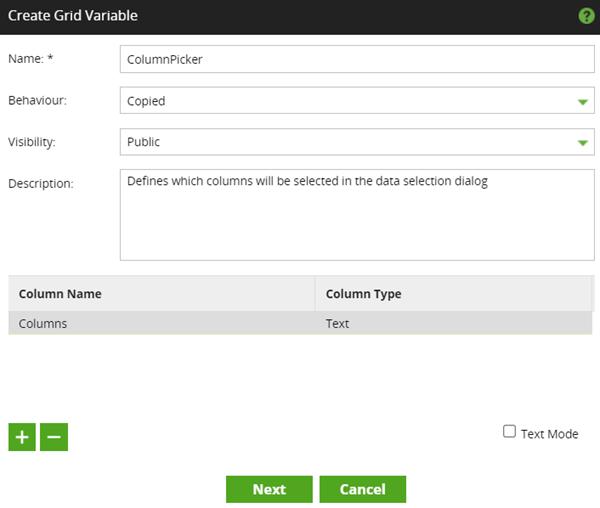 2. Populate the Default Values of the grid variable with the names of the columns you want to include in the Data Selection property. 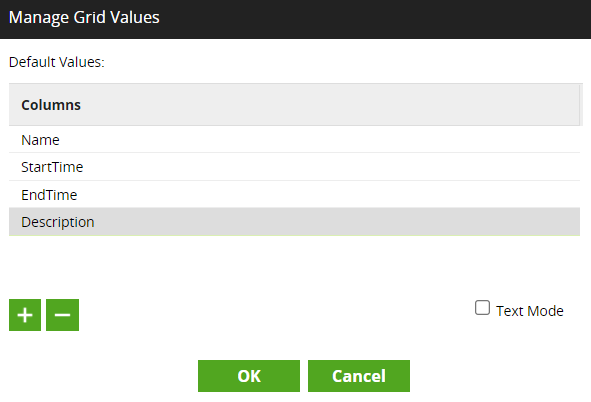 3. In the Data Selection property of your job component, specify which grid variable and which column from the variable to use. The property will then be populated with the default values you entered in the grid variable. You can use the same grid variable across all components in the job where you need to specify the same data selection, making it easier to consistently set the property and allow you to make global changes to all such properties in the future. 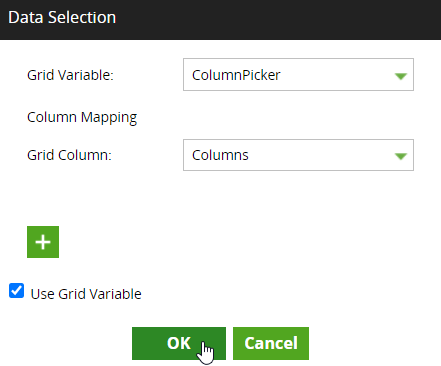 In the Create Table and Create External Table components, table metadata can be assigned from a grid variable by selecting Use Grid Variable. You must first create a new grid variable, as described above, with columns that contain the data you want to populate the metadata with. You then specify which grid variable the property will use, and which columns in the grid variable map to each piece of metadata: 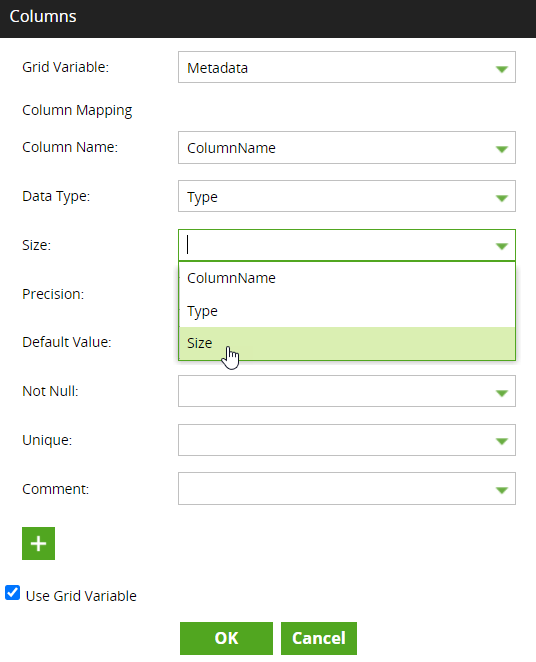 If you have a large number of variables to pass into a job along your production line, it can be convenient to make a grid variable that can then populate the variables for you.

In the Run Transformation and Run Orchestration components, the Set Scalar Variables property is used to set variables used by the component. You can use a grid variable to assign these properties.

1. First create a new grid variable, as described above, with one column that contains variable names and another that contains the values you want to put into each variable.

2. In the Set Scalar Variables dialog of your Run Transformation or Run Orchestration component, select Use Grid Variable. 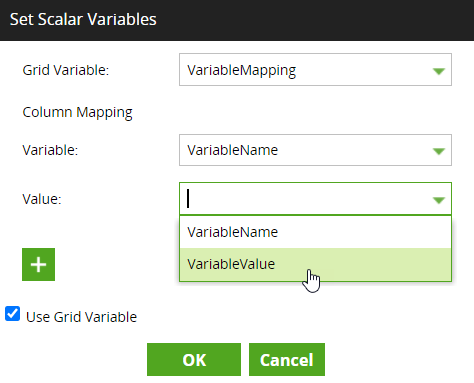 Similar to passing regular variables, grid variables can also be passed on to jobs that use the Run Orchestration and Run Transformation components, using the Set Grid Variables property. The orchestration or transformation job that you are running with the component must have a grid variable defined in it for this operation to succeed. 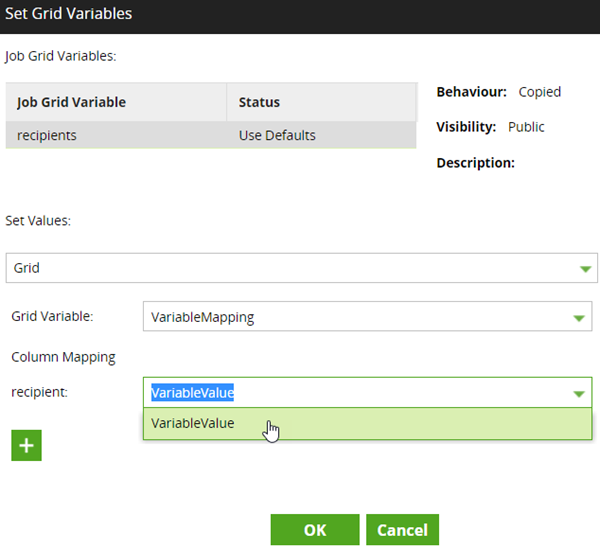 Variables become first class variables in Python and Bash scripts, and care should be taken to avoid naming them in a manner that clashes with key words in either language. We recommend using a prefix (for example, v_) to ensure no such conflicts occur.

It's possible to access and update grid variables in Python scripts. To get grid variable data and load it into a Python array, use:

To place Python array data into a grid variable use:

The following is an example Python 3 script that takes data from one grid variable, "people", puts the data into an array, and it the variable before updating a different grid variable, "names", using that array.