This article is part of a series on variables.

The dialog lists every environment variable in a list. By default, they're sorted by Name, but you can sort the list on any column. To change the sort order, click a column title to sort in ascending order of that column, and click a second time to sort in descending order. 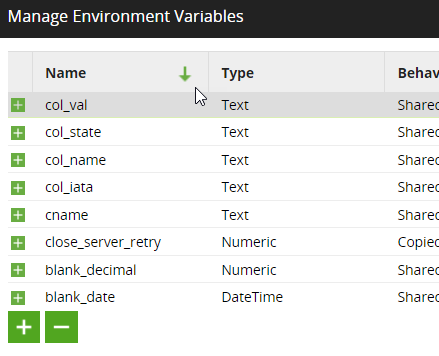 To edit an existing environment variable, click in the column whose value you want to change, and then:

To delete an environment variable, click on the variable you want to delete (this will put you in editing mode, but ignore this) and then click the remove button at the bottom of the dialog.

Variables can also be added or edited in text mode by selecting the Text Mode checkbox.

When a job begins, all variables are initialized with their default environment value, which should be set in the Manage Environment Variables overlay. The real power of a variable is that its value can be updated as a job runs, through the following methods:

Iterations can be run in parallel, in which case the variable behaviour must be set to Copied to ensure each parallel component sees and iterates its own copy of the variable.

Component export values are also used to populate the tasks view and the run history. To export a value, it must be mapped to an existing variable through the component's Export tab. It is important to map the value to a variable of the correct type according to the table given at Component Exports.

The following environment variables are automatically available without first needing to be defined. The values of these variables cannot be set in Manage Environment Variables but must be set as described in this table.

All of the above also have an id variable that is an internally generated ID and should be avoided in most cases.

Some examples of common ways to manipulate environment variables via the v1 API are given below.

When using these examples you should replace api-user and api-password with the username and password you use to access the instance. This user will require API access as well as any permissions required to alter environment variables.

These examples can be used through cURL by replacing , , , and with details appropriate for your resources.

Using that list of names, you can add /name/ to the cURL command to get the default value for variable :

This is not useful on its own, but can be used to manipulate that environment variable in the ways shown below.

Add /value to get the default value for variable :

Add /set/value/ to update this environment variable to a new default value: