This article is specific to the following platforms - Snowflake - Synapse.

The Pivot component rotates, or pivots a table by turning the individual values from one column in the input expression into several columns, and aggregates results (where needed) on any remaining column values. In a query, it is specified in the FROM clause following the table name or subquery.

The component can be used to transform a narrow table (e.g. sales, month) into a wider table (e.g. jan_sales, feb_sales).

In this example, the Pivot component is connected to a Fixed Flow component.

The Fixed Flow component is configured with two columns: 'Payment', and 'Month'. The Values parameter highlights a sequence of payments made across the months January, February, March, and April.

When we sample the data via the Fixed Flow component, we have our two columns but the data is in a raw format. We're going to use the Pivot component to pivot the 'Payment' column and produce data samples that show first the overall sum of payments per month, and then the average payment for each month. 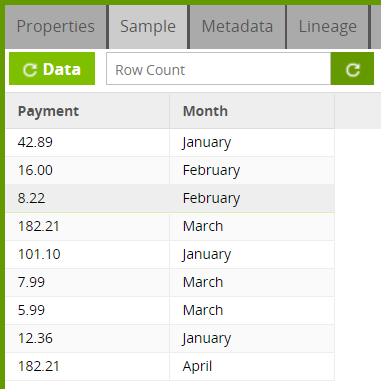 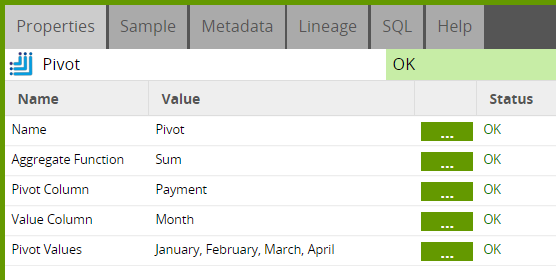 The next image shows our Pivot component data with an Aggregate Function set to 'Sum'. We can see that the payments for each month have been added together to give a final spending total. The named months have gone from acting as column data to column headers, with their payments segregated accordingly.

Now, in the next image, the Aggregate Function is set to 'Average' as mentioned earlier, and the sample shows the mean spend across each month.

In this example, more data has been added to the 'Payment' column in the Fixed Flow component. Additionally, the table has two more columns. 'Paid', which has a value of either 'Yes' or 'No', and 'Payment_Type', delineating whether the payment was made by cash, debit card, or credit card. 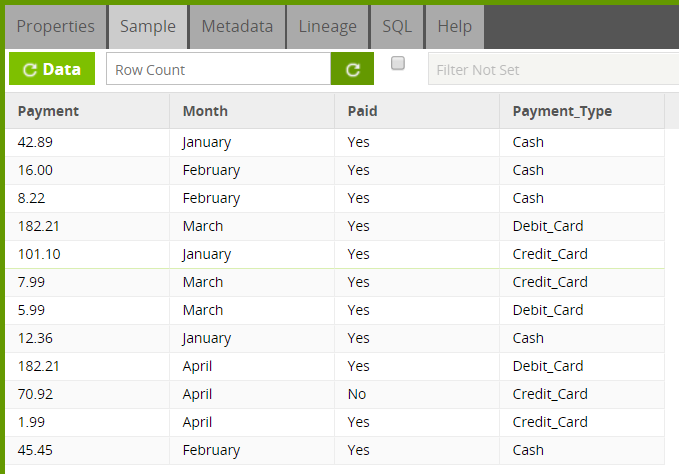 The Pivot component's properties are configured to once again aggregate payments by month using a 'Sum' Aggregate Function. 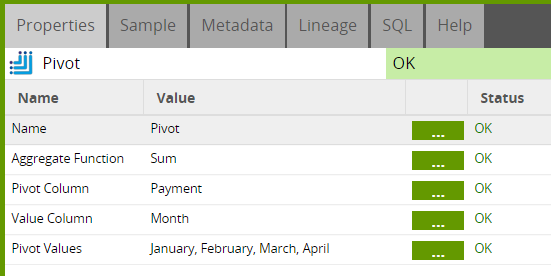 Now, we have a table that separates payments by month in columnar order while having separate rows for paid and unpaid payments per 'Payment_Type'. In this example, we can see that a number of payments made via credit card in the month of April remain unpaid.