Note: Python scripts within this component are executed by the underlying virtual machine (VM) hosting Matillion ETL and utilise the memory and compute of this VM. This component is not designed for large scale data processing scripts involving PySpark or other such compute-intensive packages.

The script is executed in-process by an interpreter of the user's choice (Jython, Python2 or Python3). Any output written via print statements will appear as the task completion message, and so output should be brief.

While it is valid to handle exceptions within the script using try/except, any uncaught exceptions will cause the component to be marked as failed and its failure link to be followed.

You may import any modules from the Python Standard Library. Matillion ETL does not uninstall any customer-installed Python libraries. Matillion ETL runs as a Tomcat user and care must be taken to ensure this user has sufficient access to resources.

AWS Users Note: For Jython and Python2, the 'boto' and 'boto3' APIs are made available to enable interaction with the rest of AWS. The AWS credentials defined in Matillion ETL are automatically made available, therefore it is not recommended (or necessary) to put security keys in the script.

Warning: Calling sys.exit() from a Jython script will shut down Matillion ETL and is to be avoided. Jython scripts can be safely terminated by allowing the script to run to the end or by using quit().

Runs the python script, redirecting any output it produces into the task message.

Both arguments are strings that should parse as the target variable type.

To access the database defined in the current environment, use the 'cursor' object provided.

This feature is provided for convenience, and is not designed for retrieving large amounts of data. After executing a query, you should iterate the cursor to retrieve the results one row at a time, and avoid using fetchall() which may lead to out-of-memory issues.

If you execute database updates, you should not try to commit or rollback. Transactions are handled for you, either automatically (Auto-commit mode) or manually using the Begin/Commit/Rollback components. This is a change compared to previous versions, so older scripts may still have commit() calls in them - these should be removed.

Additional python modules may be installed by running the pip command. Log into the instance with SSH and run the command as root:

As well as pip, you may also upload your own modules to the instance. In that case, you must include the location of the modules in the python search path, and this location must be readable by the 'tomcat' user. The general format is as below:

​Python directories can also be found with the following python code:

For most users, the directories should be:

Note: Regardless of whether a module is installed with pip or manually, it must not rely on external C modules in order to run successfully on the embedded Jython interpreter. However, such scripts should work on Python2 and Python3.

Additional Python3 modules may be installed by running the pip command.

To do this, log into the instance with SSH and run the command as root to begin the installation:

For versions 1.40 and newer of Matillion ETL.

Then to install the modules, for example, boto3:

For versions 1.39 and older of Matillion ETL.

Then to install the modules, for example, boto3:

Scripts are never forcibly killed. If you want a long running script to respond to task cancellation, the script must check for cancellation and act accordingly, ensuring any resources are cleaned up. Cancellation can be checked by querying the context:

Since the cancellation is being handled within the script, the component will still end successfully, since no uncaught exception has been thrown. IN order for cancellation to also mark the script task as a failure, raise an exception. For example:

Task Cancellation (Python2 and Python3 Only)

A Timeout property is made available in the component if set to Python2 or Python3. If a script runs longer than its timeout (in seconds) it is forcibly killed - similar to the BASH component.

This example moves all of the objects within an S3 bucket into another S3 bucket. You may wish to do this following an S3 Load, to ensure those same files are not loaded again by subsequent runs of this same job. The target bucket could also use Amazon Glacier to reduce the cost of storing the already loaded files.

The Python script imports the 'boto' module and uses it to move the files. In fact, the script copies the objects to the other bucket, and then removes the source object. A similar script could instead rename the objects and leave them within the same bucket. A list of available variables is given on the left of the window, and used in code written on the right. The script can be executed by clicking 'Run' as though the component had been run on the Matillion UI. The output of the code is shown beneath after running. 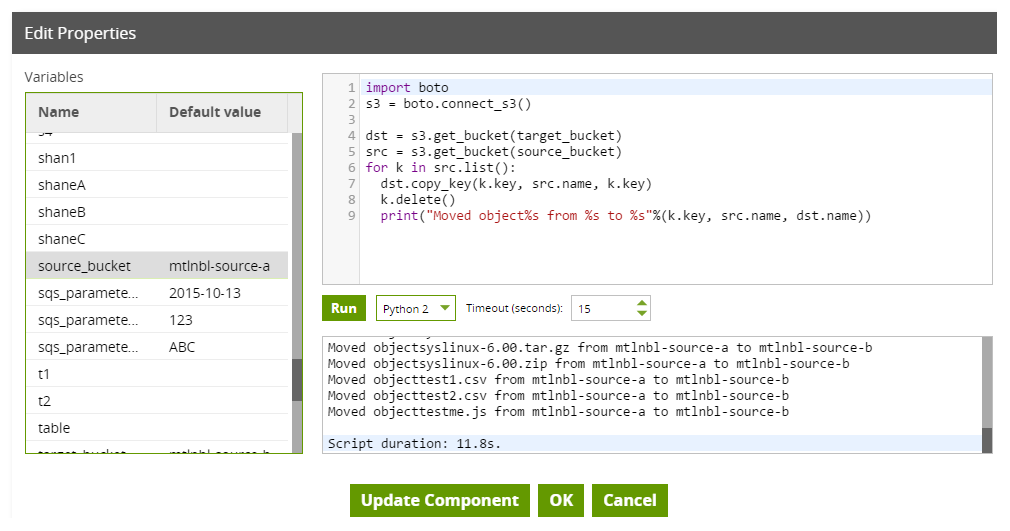 The example script below shows a database query which retrieves a single (aggregate) row of data, and stores the result into a Variable for use elsewhere in Matillion ETL.